[learn_more caption=”What is a Union?”] A union is simply an employee 0rganization protected by law where a group of workers join together to improve and guarantee their wages, benefits and working conditions. A union also gives employees a way to achieve respect and fairness on the job and a stronger voice to impact employer decisions. Without a union, employers have 100% control. [/learn_more]

[learn_more caption=”How does Union Benefit me?”] When employees join together to form a union, they can pull together their various ideas and concerns in a unified voice with far more power than speaking alone. By joining with CWA Local 4900, you will enjoy the protection of a legally binding contract, negotiated and voted on by you and your co-workers. As a union member you gain the right to negotiate with your employer as an equal and bargain over your pay, benefits, retirement, employer policies, schedules, hours of work, health and safety, job security and many other important workplace issues. There’s no doubt union workers fare better in the work world.[/learn_more]

[learn_more caption=”Risk of supporting Union?”] It is against the law for your employer to ask you about your union activity or to threaten, harass, fire, discipline or discriminate against you because of union activity. When workers are members of CWA 4900 they can depend on support from the Local if needed. [/learn_more]

[learn_more caption=”Can I talk Union at work?”] The law gives you the right to talk about the union at work when other non-work related talk is allowed or during non-work times such as breaks, meal times or before or after work.[/learn_more]

[learn_more caption=”What about strikes?”] In reality, strikes are rare. Most all contracts are settled without ever going on strike. Besides, there could only be a strike if the vast majority of dues paying members voted to do so. Union leaders can’t “call a strike”. In the event of a strike CWA International has a strike fund that helps workers in the rare event of a strike. [/learn_more]

[learn_more caption=”How much are Dues?”] CWA Local 4900 is a nonprofit employee organization that operates solely from dues. Dues are 2-1/4 hours per month. The members of the union decide the dues structure and how dues are spent. No dues are spent on political campaigns or initiatives. The Department of Labor requires unions to keep a strict record of expenditures. Virtually all dues go toward member representation. Improvements of wages and benefits you win in a union contract will more than offset the dues you’ll pay. [/learn_more]

[learn_more caption=”Who runs the Local?”] The members of the union make the decisions. Once you become a member you and your fellow workers will run your union and most all decisions are voted upon by the membership. You participate in bargaining proposals for a contract and vote to decide on whether or not you accept contracts offered by the company. You elect officers and leaders of the local.[/learn_more] 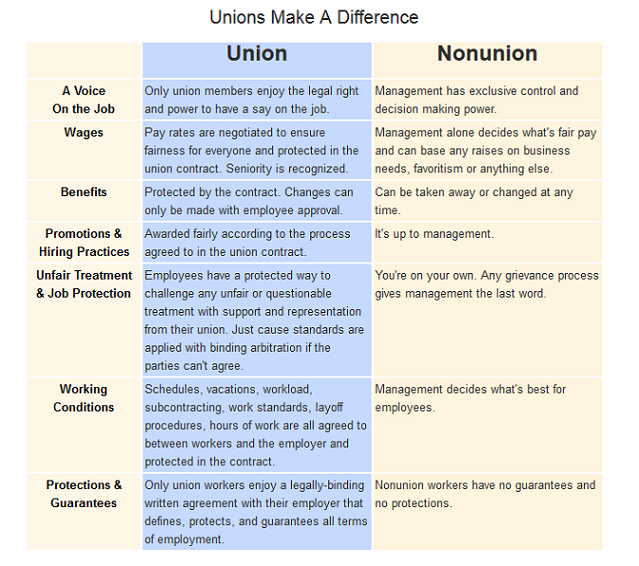 [learn_more caption=”Why file a grievance?”] Sometimes union members know the employer is violating the contract but they are hesitant to file a grievance because they think it’s no big deal or they don’t want to get in trouble. But contract violations are a big deal! And it’s your right to grieve them; your boss cannot retaliate against you for filing a grievance.

Whenever we let an employer violate the contract without challenging them, we are weakening the contract for all members. It sends a message that we will not enforce the contract. When we file grievances, we let employers know that we take the contract seriously and we will make them take it seriously, too. Sometimes, just knowing union members will enforce their rights acts as a deterrent, and management will think twice before violating the contract.