On April 28, 2017 CWA gives AT&T 72 hour notice of intent to allow the orange contract to expire.

Just before the shareholders meeting, CWA members delivered a petition from 67,000 customers and community members demanding a fair contract for workers. Randall handed the petition signatures off and they were abandoned on a table.

CWA members were able to speak with Randall about Bargaining a fair contract. In this discussion Randall states, “….We haven’t been able to get you to the table”!

In a news release to the media, AT&T spokesman Marty Richter said, “We continue to bargain with the union and remain confident a fair agreement can be reached,”

Obviously someone is providing Randall with false information as he’s taking a Lion’s stance on his position! We have been at the table for almost 3 months!

AT&T spokesman Marty Richter also stated to media sources, “Our labor agreements include annual wage increases and we’re confident employees will be better off in their new contract,”. Does that mean AT&T is going to agree to a better commissions plan? We certainly hope so! Over the last several years our members in retail have seen their commission payouts reduced to peanuts.

And let us not forget the previous change in AT&T’s attendance plan. Receiving a point for each day absent (barring FMLA approved absences) has left our members without a safety net. The current plan is unreasonable and was never agreed to by our Union. It has resulted in numerous members walking the tightrope to avoid discipline.

I don’t know your thoughts on Bargaining but this reporter believes there’s a large elephant in the room. It’s time for AT&T’s Bargaining team to openly discuss our issues and bargain in good faith.

Until then our members, along with Crazy Corky, will ramp up our concerted activity in local 4900. We ARE done clowning around. 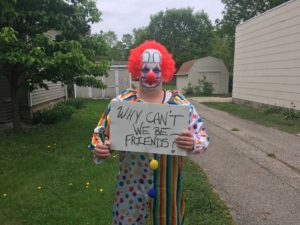