Once again I am updating you on Direct TV and what we know. Late today we discovered a letter from the district 6 VP to Local Presidents in District 6. The letter is posted below. The letter does say the international and its legal department are working on the issue at its level for the entire country. It does say that District 9 negotiated satellite work in a previous contract; while also indicating they received some compensation for that work.

I believe District 9 has DBS (Direct Broadcast Satellite) as part of their current premises technician duties. What I am unsure of is what monetary compensation they received for the work, I believe it is somewhere in the range of 25 cents. I can’t confirm this so I won’t comment further.

I do expect our international to bargain over the inclusion of this work, as I have stated previously. I believe this letter from District 6 only further supports our previously published news update on this topic. If you have not read the DTV Update 2 we posted, please do so after you read this.

As a member of the recent bargaining committee, we did attempt to bargain Direct TV work. We were not successful in that because the company refused to bargain something they did not have at that time. I’m sure we all know at this point it’s just a matter of time before they do have the work. Therefore I stand by the validity of our demand to bargain the topic.

Our work is based on a process and that’s never fast enough for most expectations and usually the outcome doesn’t meet everyone’s expectations. We need and want the work. If all or most of video transitions to satellite, what does your job security look like?

The question is what compensation can we get for the work? I am guessing there will be some legal action on the unions part before we can ever answer that question. I know the Facebook world will light up and once again myself and the rest of the D4 bargaining team will be targeted as not doing our jobs. That’s fine and I accept your criticism. Your favorite team can win the big game and we all still talk about what they could have done better the next week. This team did its job and your local is doing theirs.

We will push, scrap and fight for the right to bargain this new work and the letter that accompanies this supports our position. We want and need the work but we will continue to fight like hell for the right to bargain what comes with it. Stay tuned and we’ll keep you posted as we receive information. If you have questions about what you hear or read, please contact your representative and discuss. We want our members informed with the facts during this process! 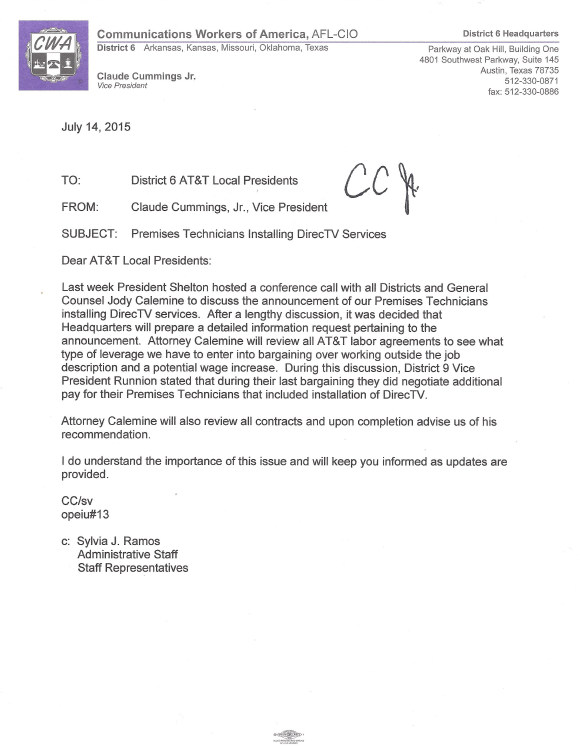