No Contract Yet – The Show Must Go On

Our mobilization team was at it again this weekend. This time two new characters entered the fight for a fair contract. Sources tell me the team visited the same manager who was delivered balloons two weeks ago. (Sounds like a story that will have to be investigated at a later date).

Last week alone there were several activities in our local that drew attention from upper management. Perhaps AT&T is finally hearing our members want a fair contract that will move them forward as well as address outsourcing and job security concerns.

In the meantime, CWA local 4900 will be increasing mobilization activities across the state. From what I’m hearing it could get very interesting to say the least.

Let’s continue to ramp it up and show AT&T we’re very serious about a fair contract! 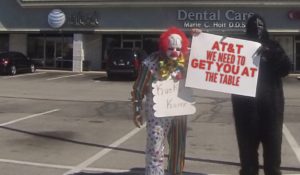